I have another cruise story!

One thing that I dislike about cruises… there are sooo many people. Don’t get me wrong, I knew that before I went on the cruise. But I honestly didn’t realize how many people were on the ship until we stopped at each island. 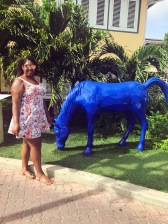 Well, Jinell and I were over the crowd and the travel time to the beach so we decided to walk around Orjanestad, Aruba. The capital city is beautiful! We stopped at local shops, bought keychains and other souvenirs, crashed a hotel area to get some free wi-fi and browsed around in the shopping mall. We took pictures, contacted our folks back home and visited a bar which had currency from all over the world pasted on it’s walls and ceilings.

As we continued walking, I quickly realized this wasn’t a regular stroll through the city. But in fact a mission. Jinell was determined to find another beach. And just as I was ready to give up, and walk back to the hotel we stopped at to take a dip in their pool, she found it!

A beautiful, small secluded beach WITH a bar! Aside from one or two patrons at the bar and two small fishing boats were rocking back and forth with the tide off to the side, the beach was completely empty. If she hadn’t persisted we would have never found the small oasis away from the masses. Safe to say, it was a good relaxing time.

As we boarded the ship, I overheard some people grumbling about their time at the beach because it was so far and packed. One guy turned to us striking up a conversation and we told him about the beach we (really she) stumbled on. And I know I shouldn’t have, but a huge smile spread across my face as we told him where it was because we found a small treasure of our own on the island.